Who Will Love Aladdin Sane? 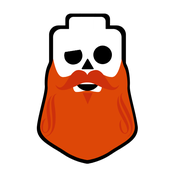 By grumblebricks
17 comments
David Bowie was more than a rockstar. He was an inspirational driving force behind entire genres of music, behind some of the best artists we have among us today. His countless interviews, musings and philosophies shaped innumerable creatives, and it is his absolute passion and creativity that I think makes him the perfect figure for a Lego set.
How better to celebrate the most creative artist on the planet than with the most creative toy?
Yes, Lego and Bowie go together perfectly.
Aladdin Sane is arguably David Bowie's most iconic character. The lightning bolt has appeared in countless nods and easter eggs in various shows, movies and other media. Countless people (myself included) have perfected the art of painting them on our faces, and thousands more have them in photo frames, paintings and clothing. This is a truly iconic piece of art that has been invented and reinvented more times than we can count, something that has transformed almost as often as David Bowie did himself. It can be recognised worldwide, and even people unfamiliar with his music will know this image.
This piece was made as an art and poetry project at university, being inspired by a lyric collage I crafted in 2016, then reborn in Lego form I think in late 2016 or early 2017. I didn't know where to put it, and so sat on the idea for a while before thinking hey, LEGOIDEAS is great, why not try there?
My second favourite David Bowie album, Aladdin Sane was Bowie's 6th studio album, and the first he wrote with newfound status as an international star. It arrived in his library not long after the death of his alter ego Ziggy Stardust, and is often mistaken for that character due to their closeness in time.
I love this album, and I hope you like what I've done with converting it into LEGO art.
With 2.5-D (partial 3-D) details such as stick-out eyelashes and lips, this album art changes shape as you move around the room, reminding one of the nature of the Starman himself.
Author's notes
Made just after I graduated university in 2017, this is a precious thing to me. I made it to remember Bowie and house my multiple creative inspirations in one place. Bowie, Lego, working with my computer.
I have revamped it once in 2019, 2020, and then again in 2021 with new renders.
(and now again in 2022)
This final version is much closer to a product than the original, which had no base and was instead defying the laws of physics, much like Mr Bowie himself. It took me a few years of Lego designing to develop the skills needed to properly finish this product, but I am always looking for ways to improve, so feedback would be appreciated!