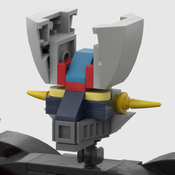 By CG_Bricks
14 comments
Steel Jeeg (also known as Kotetsu Jeeg) is a Japanise anime and manga series created by Go Nagai in 1975.
During an archaeological research in Kyūshū, Professor Senjiro Shiba - a well-known Japanese archeologist and scientist - discovers a mysterious bronze bell. Deciphering the ancient inscriptions that adorned it, he became aware of the existence of a technologically advanced civilization hibernated in the rock waiting to come back: the ancient Yamatai kingdom, ruled by the evil queen Himika.
Professor Shiba understands that the bell is a powerful weapon that could allow queen Himika to conquer the world and decides to hide it in order to save mankind. After a serious laboratory accident in which his son Hiroshi is involved he saves his life by implanting the miniaturized bell in his chest, transforming him into a cyborg and making him invulnerable.
Hiroshi is unaware of his powers until the Yamatai kingdom awakens and kills his father, who reveals him that he can transform himself into the head of the super robot Steel Jeeg.
From now on he will fight the Yamatai kingdom to protect mankind, with the help of Miwa Uzuki who pilots the Big Shooter, that gives Jeeg his body parts and weapons (such as the Mach drills).
This is my second attempt to create a lego mecha version. I consider this project as a big improvement than the previous one in every aspect. This model is made of about 750 pieces, it's 35 cm tall, and was built using a lot of tricks and interesting solutions.
As for Mazinger Z, Steel Jeeg is one of the most iconic and recognizable mecha robot, partly due to its famous theme song. That's why it absolutely deserve a Lego counterpart.