The Soviet Mars program has historically been dogged by setbacks and failure. After a suite of four spacecraft all met their demise to the same malfunction in 1974, the Soviet Union decided to focus more on creating a lander to withstand the conditions of Venus. At this they were very successful, having soft-landed ten spacecraft onto the Venusian surface. But by the mid-1980s, after the success of the twin Vega spacecraft, the consensus among the Soviet scientists was that we had learned all there was to learn about Venus. Plans for a Venusian rover were scrapped in favor of an ambitious assault on Mars and it's largest moon: Phobos.

By this time American domination of space was waning. No interplanetary launches were made between 1979 and 1988 by the United States, but in that time the Soviet Union successfully launched six probes bound for Venus, had a massive spacestation, and were completing their own spaceshuttle. The Fobos program, it was hoped, would make up for the two decades of failure that plagued the Soviet Mars program. The mission was also an unprecedented example of glasnost, containing components and support systems from 26 countries, including the United States, who helped relay transmissions. The main bus also housed an enormous payload of 25 scientific instruments to investigate Mars and Phobos, as well as two Phobos landers.

Two spacecraft were launched, Fobos 1 on 7 July 1988 and Fobos 2 five days later. Fobos 1 was lost in early September owing to a ground controller's typing error in the computer uplink: the command was missing a hyphen. Fobos 2 was much more successful, and after sending back Solar environment data for five months, the spacecraft entered Martian orbit on 29 January 1989. Within a matter of weeks it exceeded all the information gathered by 16 Soviet Mars missions, and began to equal the success of Viking. But disaster struck on 27 March. The spacecraft, only ten days away from releasing its landers, failed to respond to a scheduled communication session. A weak signal was eventually detected, and from this the Soviet ground control deduced that Fobos 2 had a faulty attitude control thruster and was now tumbling end-over-end. Because it could no longer orient itself towards the Sun, Fobos 2 died from a power shortage.

The loss of the twin Fobos probes were a major blow to the Soviet space program, which had an unending string of interplanetary successes since Venera 9 in 1975. A third Fobos spacecraft was primed for launch in 1990, but the collapse of the Soviet Union delayed and eventually canceled it. The layout for the Fobos spacecraft was used again in the failed 1996 launch of Mars 8. This failure was the final nail in the coffin for Soviet/Russian space exploration for 15 years. The Russians attempted a sample return mission to Phobos in 2011. Called Fobos-Grunt, this spacecraft failed to leave Earth orbit.

Even after 20 missions aimed at Mars, the Soviet Union (and later Russia) failed to rack-up a single completely successful mission. The debilitating attempt of Fobos 2 in the late 1980s was one of the most advanced spacecraft ever built, containing more scientific instruments and more international cooperation that any other mission before or since.

This minifigure scale Fobos 2 MOC contains 583 pieces, and includes the DAS and PrOP-F landers. This model is a great, and very unique, addition to any collection! 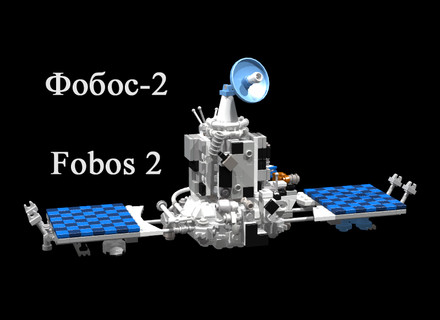 The front of Fobos 2, showing many of the incredibly numerous 25 scientific instruments.

The rear of Fobos 2, showing the DAS and PrOP-F landers, as well as the thermal control system. 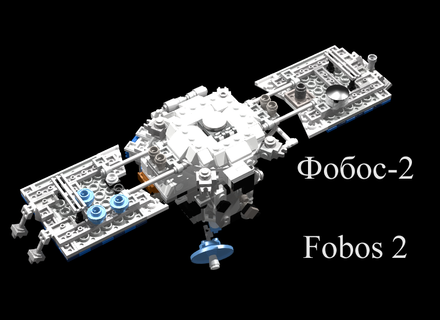 The bottom of Fobos 2, showing the attitude control thrusters as well as the many Solar and Martian environment instruments. 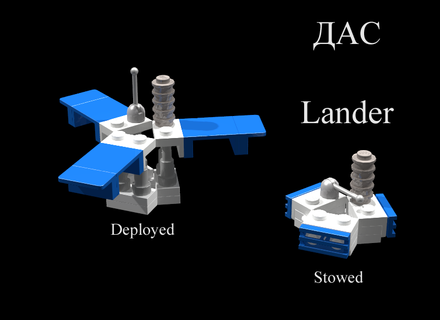 The DAS Lander (short for "long-term autonomous station" in Russian). It was designed to harpoon itself into Phobos, transmitting data directly to Earth for at least 3 months. 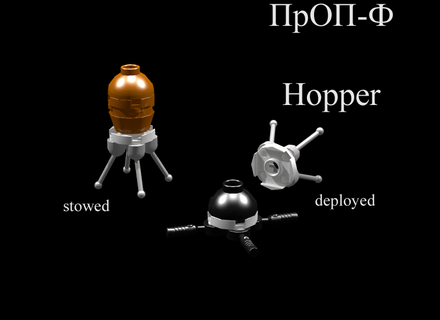 The PrOP-F "Hopper" or "Frog," was a unique rover that relied on the use of slender arms rather than wheels for movement. It was designed to travel 200 meters in 4 hours, relaying surface composition and gravity information to the orbiter.