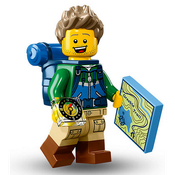 I wish to have a beautiful train station that would fit perfectly inside my Lego Modular city. I think it is THE missing piece in the Modular series. And it would make a great link between the Modular series and the train series which are to me the two best Lego series.

I worked a lot on what makes Modular buildings great: the global design, a good playability and nice details.

I made the station look like a 19th century traditional French train station. The front façade and the corner towers are mainly inspired by the Orsay museum in Paris which was at first a train station. The platform side façade has a clock that looks like the one you can see on the station in the south of France (Aix-en-Provence or Toulon for instance).

The building is easily openable to provide an easy access to each part of the station. The build is scaled for minifigures. The minifigures can access the first floor rooms with the stairway and the walkway and the roof thanks to the ladder.

I hope you like the 2800 piece set I came out with. Don't forget to support my project if you do :)

Thank you very much and happy building !

PS : can you find a micro-scale model of the Lego Emerald Night locomotive among the pictures ?