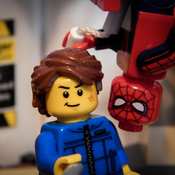 The lighthouse keeper walked outside and stood on the dock watching a surfer riding the waves. Suddenly the waves got violent and knocked the surfer off his board. The lighthouse keeper started to laugh but the waves morphed into a massive hand and grabbed him off the dock, flinging him into the water. A strange creature that seemed to be partly made out of water climbed onto the dock. Elsewhere (classified location): The alarms started going off and made everyone jump. Jed Stele (also know as Titanium warrior) jumped up and ran to one of the computers that was blaring an alarm and looked at it. "Looks like Tsunami is up to no good again" He said "I'll take this one, alert the C.C.U"* "Right away"  Jed's friend Elliot Raymond* replied. Jed ran to the portal door and keyed in the location and jumped through. Half a second later, Jed was standing on a dock sticking out over the ocean. The creature that was part water was smashing up a lighthouse and two people floundering about in the water. Jed concentrated for a moment then his skin began to change to titanium. When all his skin was metal, he charged forward, grabbing two life preservers and tossing them to the people in the water. "Tsunami!" Titanium Warrior shouted, catching the strange creature's attention. "Hero" Tsunami hissed "you should not have come". He waved his hand at Titanium Warrior and the waves changed into a giant fist and hit him full force. The waves hit Titanium Warrior, making him disappear in the swirling water. Tsunami laughed, thinking he had won already.  The water receded from the dock. Titanium Warrior was still there, unmoved, dripping wet. He turned his head, seeing a powerboat in the distance. "Your outnumbered, Tsunami, the boat has C.C.U agents in it, surrender!" Titanium Warrior shouted. "I am not out numbered, Hero" Tsunami replied and let out a piercing shriek. Two more part water creatures jumped out of the water and attacked Titanium Warrior. he flipped out of the way, throwing one of Tsunami's goons into the air. When he landed, the other goon threw a harpoon at him, but it just glanced off his metal skin. Titanium Warrior grabbed the goon and tossed him at Tsunami, hitting him and knocking him down. The power boat pulled up just then and two C.C.U agents jumped out and fired stun blasts at Tsunami and his goons. Then, one of them started loading the villains into the boat and Titanium Warrior helped him and the other agent jumped into the water and helped the lighthouse keeper and the surfer out of the cold water. When that was done, the agents and Titanium Warrior got in the boat and zoomed off to the prison.

*(also known as PermaFrost. He will come in another set)

Powers: ability to turn his skin into titanium, super strength

Weakness: cannot do any damage to other titanium

Arch enemy: Comet (he will be in another set)

Arch enemy: Fire Blade (will appear in another set)

Favorite saying: hissing something, but no one can understand him.