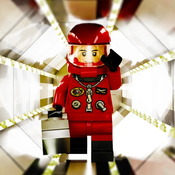 2001: A Space Odyssey
is a 1968 science fiction film directed by Stanley Kubrick. Written by Kubrick and Arthur C. Clarke, the screenplay is based in part on several of Clarke's short stories, including 1948's The Sentinel and 1950's Encounter at Dawn.
The film begins with a group of ape-men struggling to survive every day until one day a black monolith appears that completely changes their lives. Millions of years later, when man has long since conquered space, a space shuttle with the scientist Dr. Floyd flies to the moon station Clavius. There the scientists show him a monolith similar to that of the prehistoric people.
18 Months Later: David Bowman and his crew embark on a scientific mission to Jupiter. On board is the infallible computer HAL, which has complete control over all processes in the ship. However, the closer they get to their goal, the more insecure HAL seems to become. Strange things then happen.
Open the pod bay doors, HAL!
The build includes David Bowman, Dr. Frank Poole The pre ape-men
as well as the EVA pod and the Monolith.
Extravehicular Activity pods "EVA pod" served as transporters and mobile workshops during extravehicular activities. This allows maintenance work to be performed outside of a spacecraft. It is made from Sloped and curved parts to give it its distinct ball like round shape the back panel is removable and reveals the interior where the minifigures can sit to control the ship.
The shiny and black monolith stands on a small podium out of brown bricks resembling the rocky surrounding where it was first discovered by the ape-men