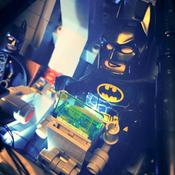 This is a Polar Express locomotive which my design was inspired by the movie < Polar Express> 2004 American film based on the 1985 children's book of the same name by Chris Van Allsburg.

The Locomotive featured in the film is an American 2-8-4 Berkshire type steam locomotive,  with a cowcatcher, modeled after the Pere Marquette 1225, which had spent many years on static display near Spartan Stadium.

My four years old boy is a big huge fan of lego and trains.After watching the movie < Polar Express> again and again. My son keep urging me for a polar express of lego version. Finally and lastly , I did one for him.

I believe this would be a great lego set as there are numerous lego train lovers. I believe most of the children and their parents will definitely love this set as they do think the same way as the hero boy.

" Though I've grown old the bell still rings for me, as it does for all who truly believe."