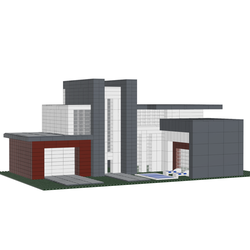 This is a modern mansion. It is build for looks as it does (in my opinoin) look astonishing. It has a pool in the front with two beach chairs beside it. It has a garage to the left of the house with a driveway. The entrance also includes a sidewalk which leads to the mansion.  The second floor has a balcony in the right and a small room on the left. It has about 2000 bricks in it. The house contains 1 bathroom and 2 bedrooms and a big kitchen with a living room next to it. An image is provided of the bedroom with a balcony. The wall of bricks are clear to replicate a large glass window. It has a bathroom in the corner and a bed to the left with two chest drawers beside it and a lamp. This is meant to be very simple. The smaller bedroom consists of a smaller bed, a drawer, and a lamp while having a big glass window. The kitchen has a fancy checkerboard pattern with an oven, a microwave, a sink, a blender, and a refrigerator. The living room has a large couch with a flat screen tv and a couple leg rests.

This model should be a set because of its looks. Although it may not be functional, it does fit to being on a shelf like other sets (such as the taj Mahal). It should be designed with two parts, the first floor and the second floor.  It would certainly fit other sets with a good "cool factor" with its modernized architecture. Its massive amount of pieces can be a nice project that someone can work on with it if it were to be a set.

So does this look good and do you want it in your room?

Support it and lets make this a set!