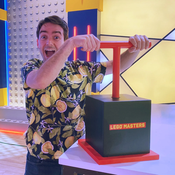 By Renaud Baur
53 comments
The Mésoscaphe (PX-8) Auguste Piccard is the first ever passenger submarine, designed to transport 40 visitors into the depth of the Léman lake (also known as lake Geneva).
It was specially built for the 1964 Swiss national exhibition in Lausanne, Switzerland, by engineer Jacques Piccard. The submarine was named after his late father, the famous Swiss engineer and explorer Auguste Piccard, inventor of the Bathyscaphe (a deep sea submarine) and trivially known for being the inspiration of professor Calculus in the adventures of Tintin.
Between July 1964 and November 1965, the Mésoscaphe achieved 1100 dives to a depth of approximately 150 meters, allowing 33 000 passengers to discover the wonders of subaquatic travel.
However, the bleak sight of the muddy bottom of Léman lake, not as rich nor colourful as the Red Sea or the Great Barrier Reef, and was sometimes mocked by visitors.
After the end of the exhibition, the Mésoscaphe was sold to different organisations, and used for scientific purposes in the Mediterranean Sea, Pacific coast of North America, and in the Gulf of Mexico.
In 1984, the Mésoscaphe was damaged during a hurricane, and towed to a junkyard in Galveston, Texas.
More than a decade later, the once mocked and abandoned submarine was bought by an association, brought back to Switzerland at vast expense, and after many years of loving care and restoration, it is now displayed in the Swiss museum of transports. Though, it will never dive again, the legend of the first and only passenger submarine will continue to amaze all lovers of the underwater world.
When I discovered the history of the Mésoscaphe, I simply could not believe it. Living on the south side of the Léman lake, I always considered it my favourite place on earth. So I was proud, intrigued and amazed that so many passengers, more than fifty years ago, were able to discover the very heart of it. I would have wanted so deeply to be one of them!
So, I decided to take part of the Mésoscaphe's adventure in my own and favourite way, by re-building it with LEGO bricks! It was a long and difficult journey, because there were so many challenges. I wanted it to be in scale with the LEGO minifigures, I wanted it to look as good on the inside than on the outside, and of course, I wanted it to be sturdy so that I could swoosh it around!
This final model is more than a meter long (100.8 cm), 24 cm high, 23 cm wide, and composed of approximately 2500 bricks. It can easily be disassembled in 4 different parts to allow easy access to its interiors. Each of its 40 portholes are hollow, so that the passengers can really see through them, but also sealed on the inside by a transparent rounded element.
Just like the real Mésoscaphe, it can fit up to 43 minifigures (40 in the cabin, and 3 in the cockpit), although I only selected 6 characters to represent the full staff: the captain, the pilot, the mechanic, a steward and a stewardess, and finally a regular passenger that bears a strange resemblance to Jacques Piccard.
I believe that the Mésoscaphe would make an extraordinary LEGO set because of its superb design, its sleek lines and its originality. But more than anything, it's the unique vintage look of this sixties submarine that made me build it for myself: it feels like owning a prop from a movie!
LEGO Ideas have already brought us two excellent models of submarines: Shinkai 6500 and the Beatles Yellow Submarine. The Mésoscaphe Auguste Piccard would be a perfect addition to this ever-growing collection of ingenuous, inspiring and dreamy vehicles.