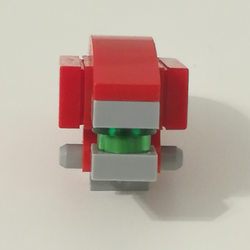 Fighting Mech - Paladin is a miniature mech standing at about 6" tall, 4.8" wide, and 1.25" deep. It is a relatively small and quick to build set. It features a smooth design, a sword and shield as accessories, a total of 12 joints, 360° hip rotation, a bend at the toe, and 360° rotation as well as up and down movement at the neck. The model is able to stand on it's own without assistance for a variety of poses, although some poses may require additional support. I built this model because after seeing all the great sets to come out of Lego ideas I wanted to see how far I could get with my own project. The concept for what I wanted to build spawned from my love for Eastern/Japanese media such as Gundam and Neon Genesis Evangalion.

I think my project would make a great product because, as I stated before, it's quick to build so you can get right into playing or put it on display. It's also sturdy, which means it won't break into 100 pieces if it falls to the ground. The size of the build means it won't take up much space on a shelf or in a drawer. You can also let your imagination run wild with the variety of poses you choose to put it in because of it's great articulation. I hope you enjoy my Lego idea: Fighting Mech Paladin.