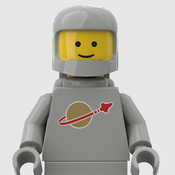 The exploration M.E.C.C.A.S. (Multi Environment Closed Cybernetic All-purpose Suit) is a sealed, single astronaut walker armor. It has a air sealed bubble windscreen over the head of the user and two tanks on the back of the suit unit as air of fuel containers. On the right shoulder has a single stud shooter and on the other shoulder two flick missiles for alien attacks. The armor holds on its hand a deep surface metal detector.
The M.E.C.C.A.S. is design to use heavy equipment on hostile environments. The exploration unit is used on planetary exploration with extreme atmospheric conditions.
Why did you build it?

Why do you believe this would make a great LEGO set?

The maintenance bay functions as a playset. For those interested in mechanics, the bay can be used as a toy garage, not only for the MECCAS, but also for medium size Lego vehicles and small spaceships. The design allows to get several bays and stack them side by side creating a large hangar.

The MECCAS can be used as a small action figure and play with the metal detector and weapons accessories.

It will be a great addition as a set for both, adult fans and for new generations.