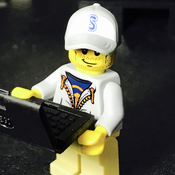 The VF-1 Valkyrie was the centerpiece Mecha design for the anime series "The Super Dimension Fortress Macross" and the OVA "Macross: Do You Remember Love".
The VF-1A is piloted by Hikaru Ichijyo.
In the western adaption "Robotech", the variable fighter are called "Veritech". The VF-1A is piloted by "Rick Hunter" in this adaptation.
This build is of the fighter mode and does not transform.
I've been working on and off on this MOC since 2017.
It consists of approximately 2550 bricks, including the stand. But I'm still making improvements at this point in time.
It measures a length of 64cm and a wing span of 72cm (if the wings are fully extended).
It features retractable landing gear, sweepable wings, a detailed cockpit and exterior.
Macross (Robotech) has a quite big collector\ fan base. Many western enthusiasts import toys from Japan and these items have hence become highly thought after.
I want to believe that my creation could be desirable for any Macross\ Robotech fan that enjoys the designs of the show(s).