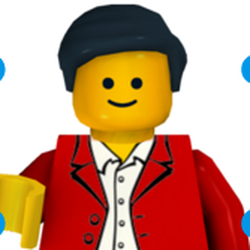 This project is of course based of the Batman Arkham Origins game. I have tried my best to have all the features from the games included in the project and hope you are all satisfied. Some of the things that the project tries to capture from the game include: Structurally weak walls, vantage points for Batman to stay on, the inverted take down, places where Batman can hang from to do the ledge take down, and a Wayne Tech security lock to lift up the roof. The structurally weak walls are just plates attached to studs so that they can be easily taken off, but still look good. The vantage points can be taken off so that it looks like the thugs have shot it off, like in the game. The inverted take down is just like in the game, the guy is dangling over the ground, and with a shorter LEGO rope element if you take the stud of the thug will crash to the ground with severe brain damage. The Wayne Tech security lock, doesn't exactly do anything (Other than lifting the roof) but it does look good. And that's all there is to it.