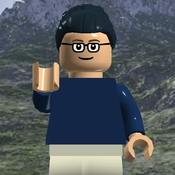 By mh95
34 comments
What is it?
This project is a ~1:256 model of the Parthenon. It imagines the Parthenon as it may have looked back in the late 5th century BC, some time after completion.
The Parthenon is one of the most famous buildings in the Western world. In classical Athens, it was the home of a massive, 40-foot tall statue of Athena Parthenos (the goddess’ virgin-warrior aspect), and a war treasury. The temple itself was so special that the Athenians gave it more sculpture and color than many other temples found throughout the Greek world. In addition, they used only the finest, shining white Pentelic marble for everything from the foundation steps to the roof tiles.
Why did you build it?
I’m fascinated with ancient Greek religion and temple architecture. Some call the Parthenon the “most perfect” Doric temple ever built. This is because they are thinking about how one set of rules seems to govern everything about the building’s form, though this is debatable.
Everything from the Parthenon’s base platform, to its columns, and to the spacing of its metopes, show evidence of customized curves and adjustments that were made to correct for optical deficiencies (distortion, elongation, and bowing or sagging) unique to every stone and corner of the building.
Since it was built, everyone from classical Greeks, medieval Christians, Ottoman Muslims, and visiting Western Europeans have all praised the building for its beauty and visual dominance. To be sure, the building has had its fair share of critics. The damage which the Parthenon endured across many centuries may shadow such praise, but modern restoration and conservation efforts have brought much needed attention to the building’s structural and cultural integrity, as well its sheer impact on the Western architectural tradition across many generations, states, languages, and peoples.
My model was a chance for me to explore my own fascination with the Parthenon, by replicating how the building made use of its allotted space across its length, width, and height. It’s very detailed, but not as much as it could possibly be. Many artistic details on the real building are dramatically simplified in my model. For instance, the triglyphs, metopes, and frieze sculptures are all laughably represented by a single blue stripe. The pediment sculptures are just single-piece abstractions with hose heads, flower studs, studs, and half-studs! Nevertheless, I think this model still makes for an excellent miniature.
The greatest achievement of this model was the incorporation of Entasis, the gradual upward thinning of columns (by using tube pieces of slightly smaller thicknesses), and Corner Contraction (bringing corner columns closer together in order to let the whole building appear more compact - this was done by alternating between 1 x 1 plates and 1 x 2 jumper tiles). These were real, vital features of Greek temple architecture in general, and tap into the real Parthenon’s architectural history, as well as the innovations of the 5th century BC Athenians.
Other than that, I’m also proud of the “brick-built” micro-statue of Athena. It consists of Athena, a spear on her right, with “Nike” clipped on her right arm, her shield on her left arm, and the snake of Ericthonius on her left as well. The real thing was made of gold and ivory. The statue here is made with chrome gold and pearl white.
*Note, the minifigure featured next to Athena's statue in the 6th render isn't provided in the build. It's there simply to suggest a size comparison.
One of the coolest moments in the building experience was when I realized that all the different parts of the building actually met together in height perfectly at the cornice! This was something which gave me anxiety all the time before this. This is because, in order to replicate entasis, I used a Technic 1 x 1 Lift Arm piece in each exterior column. This piece throws off LEGO’s standard height interval.
To balance things out, I rested the entire inner temple on a bed filled with the same piece, in addition to lightsaber hilt pieces on top of them. But the two parts don’t even out in height until the cornice. The difference in height intervals below the cornice causes the front and back of the inner temple to be slightly higher than the floor of the exterior ring of columns. But this is actually accurate to the Parthenon in real life! The second row of columns on the front and back of the real temple, behind the main front row, stands on a slightly higher platform.
Why do you believe this would make a great LEGO set?
I think the primary value of this project is as a display set. It should fit on any book shelf, or won’t take up too much space on a table or stand, while at the same time being comparable in size (at least in “ground area”) to sets like the US Capitol or White House.
It’s micro-scale, so it isn’t exactly playable. However, it does have a detachable roof, and a full interior, so play isn’t out of the question.
Those who have the Colosseum set have the option of putting this Parthenon model alongside it as part of a “Greece/Rome” collection, since the two models would roughly be to scale with each other.
Furthermore, LEGO has already come close many times to building the Parthenon, in the forms of the neoclassical US Capitol, White House, Lincoln Memorial, Brandenburg Gate, and Trafalgar Square sets. Thus, LEGO seems so close to making a set for the building which represents the ancestor of them all. Could it be this one?
Lastly, this model was a good chance to present some less conventional reconstructions of the Parthenon. For example, the back treasury room (actually the front as you ascend the Acropolis) is usually depicted as having 4 Ionic columns (with scroll-like tops). My model is inspired by the idea that these 4 columns were actually Corinthian (columns with flowery tops).