The Gardener and the Fakir (De Tuinman en De Fakir) 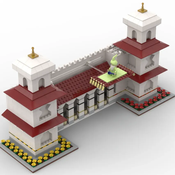 By Marius06
14 comments
The Gardener and the Fakir is one of many fairytales found in the Fairytale Forest at Efteling in the Netherlands.
The story is about a very wealthy Sultan, who lived in a large palace. One day a friend of his visited the Sultan and gave him tulip bulbs. The Sultan wasn't really impressed by these tulips, because the bulbs were very ugly and looked like onions. Even though the Sultan didn't like the tulips, his gardener still planted one of them. One day the Sultan got very sick. Not even the best doctors could cure him. Nobody knew what to do. Then all of a sudden a fakir showed up at the palace. The gardener welcomed him and gave him something to drink. He had a magic flute that, when played, made the flowers grow. He also told the gardener that the Sultan could only be cured, if he appreciated the beauty of just a single flower. From then, the fakir would play his flute every day and soon the Sultan got better. You can still see the fakir flying on his carpet and playing his flute in the Efteling.
In the Efteling, you can view the Sultan's castle with the Fakir flying from one tower to the other and playing his magic flute to grow the flowers
This could be a great LEGO set, because you can put it up for display. Even if you are not an Efteling fan it is still beautiful. It also has a play feature in it, which is the flying carpet. You can fly it from one tower to the other just like in the Efteling.