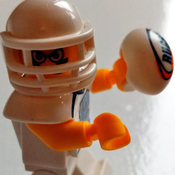 By Lets go
8 comments
This build is a replica of the NFL logo and miniature pitch which the Minifigures can take part in and play a mini Super Bowl.
The build comes with six Minifigures. Three New England Patriots and three New York Giants.
The main build contains a large NFL logo, which is attached to a stand and can be angled and contains a mini yet still quite large pitch which the Minifigures can play on. The pitch has two goalposts either side and two touchdown lines in which the teams can score.
Also included are a football and a trophy for your winning team.
Due to living in the UK the main sport is football and there is little coverage of America football however I watched many previous games getting more hooked after each one (especially watching the patriots) I have always wanted Lego to release an NFL set, however, they never did and so here I am with my build to try and make that dream come true.
Thanks for looking and don't forget to support if you like this project