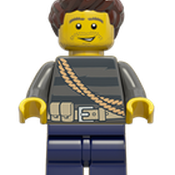 Here is my third submission to Lego Ideas, the iconic Trabant.  The model is of an 80's 601 Deluxe Limousine.

The Trabant 601 or "Trabby" was often considered the "peoples car" of East Germany where it was produced largely unchanged from the 1960's right through to the early 90's.

It was powered by a tiny 2-stroke, 600cc, 2 cylinder engine and featured front wheel drive.  The cars were basic in their construction and features.  Never the less, in the communist led German Democratic Republic at the time it was a privilege to own a car and the Trabby was one the few models actually available to buy.  Waiting lists were long and amazingly, readily available second hand Trabbies were more valuable than new ones.

Following the re-unification of Germany in the early 90's Many East Germans abandoned their Trabants in search of more modern Western cars.  Trabbies now have a cult following and are well recognised and loved around the globe for their quirky looks, driving characteristics and their distinctive 2-stroke noise.

This Lego version comes with opening doors, bonnet and boot.  A functional interior with tilting seats and a detailed dashboard including the Trabant's unusual column mounted manual gear shifter.

Under the bonnet there is a detailed replica of the 23bhp, aircooled, 600cc 2-stoke motor.

In the boot you will find a typical East German toolkit including a bottle of two-stroke oil and a tow rope.

An unusual feature on this model is the rear suspension.  In order to achieve the Trabant's familiar positive camber on the rear wheels I have designed a simple but effective rear axle to give the model a more authentic look.

The roof removes as one piece and the car is scaled similar to the other creator models with a similar brick count.  I'd anticipate the set costing around £60-£80