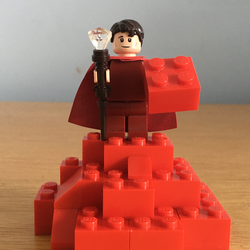 This model is based off the Crown Victoria seen in Men In Black (MIB). It is a simple design, though much effort was put into this, and it includes three characters: Agent J, Frank the Pug and Edgar. Both of the minifigures are made of genuine LEGO parts with no fake elements. Although, I borrowed Edgar’s head from Remus Lupin, which has an alternate expression, that is mot meant for use. To access inside the car, you can either pull the main section of the roof off, or remove the roof at the back, then the front. The car sits one minifigure, with space for Agent J’s gun at the back and for Frank to stick his head out of the window. In the images shown, the windscreen is rather scratched up, but when it is brand new it would be very clear to see Agent J sitting at the steering wheel next to Frank. This model does not include Agent K yet, but if you want to see him appear in this model, leave a comment with any other suggestions for more MOCs and updates.