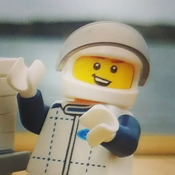 Many of you probably remember the old Speed Racer TV series, or more recently the short-lived LEGO theme. While I do remember those sets fondly, they were made before LEGO really cranked up the standards of their models, and I think that the LEGO community should get another shot at a model for the iconic serie's Mach 5. This model comes with a sleek design, reminiscent to the car driven by Speed Racer in the cartoon. The model seats 2 minifigures and the set could include updated minifigures of the Racer family and Sparky and Trixie on a stand (similar to the Ghostbusters set (I just really like that display concept)). The model could also be displayed on a little vignette. The model is also low in parts count, coming in at only 156 pieces (not including any minifigures) which would mean that the set could be affordable for children at 20-30 dollars.