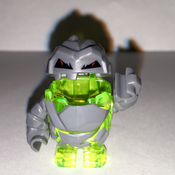 ​The Assault-class-Shadow is the mysterious and most sought after starfighter in the galaxy, both by good, and evil. With intricate details such as the interior, the huge propulsion system, working landing gear, and the awesome weaponry and front, its no wonder its a wonder. The misunderstood pilot, Everin James, is a veteran hero whose greatest wish is to defeat his pursuers. Now. Will he be able to defeat and escape Cronxin and the Kranxian mercenary with their gray C-Sidestriker? Its up to you!

This ship has an acceptable amount of sturdiness, has a lot of cool details, and would match well with what space fans want. New photos showing the detail and the extra stuff will be added soon!