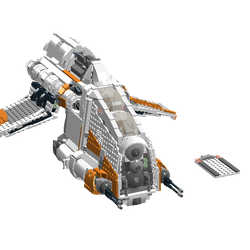 Complete the full saga star wars the old republic with the rendaran ship from the SWTOR game and trailer.

I got the idea to build this ship for over a year ago, it has taken very long time build. Many versions been completed to get this result.

I have doing some changes make it look like the ship in the trailer. However, it is only some small details, as the front has 3 air intake in the trailer but only 2 in the game. I also changed the side engines (wings mounted) a little bit, so it looks more like an engine (also at it is in the game trailer)

I had made the small changes because the ship has a rawer look in the game trailer.