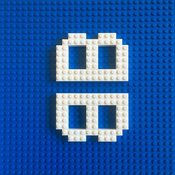 By Brickbuddies
46 comments
We Bare Bears is an animated serie created by Daniel Chong for Cartoon Network.
The show is about a family of three bears of separate species, with different personalities, interests and talents, trying to fit in a human society.
The main characters are Grizzly, Panda and Ice Bear.
Ice Bear is the youngest of the trio, but is the strongest and the most mature of them.
He is not very conversationalist, and generally speaks in very vague sentences.
Panda is the middle brother. He has more knowledge about things regarding technology and things from Asian culture. He is the most delicate of the trio.
Grizzly is the oldest bear, and leads his brothers. He is hyperactive, loud and talkative.
He's always optimistic and gluttonous. He loves to make friends, enjoying attention and generally being very social and friendly.
The Bears often form a "bear stack", which they use to get around the city. The stack has become perhaps the most recognizable image from the show. On this set you can place the bears separately and also on a stack.
This is one of my favourite animation show. I hope other fans of this serie would like this Lego Idea and support it.