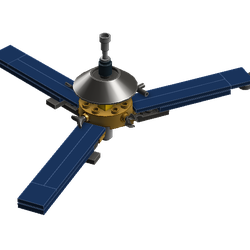 The Juno probe is a solar powered Jupiter orbiter made by NASA and launched on an Atlas V 551 (not included) More information here: https://en.wikipedia.org/wiki/Juno_(spacecraft)
I think that this would make an awesome Lego set as the Juno probe has done several world firsts, deploying the largest solar arrays ever on an interplanetary probe, discovering Jupiter's Southern storms, and carrying a plaque dedicated to Galileo Galilei, as well as three special Lego minifigures, specially designed out of aluminium, to withstand the extremes of space. The three minifigures are Galileo himself, Juno, Jupiter's wife, and Jupiter. Galileo is holding a telescope, to represent the scientific discoveries he made, Juno is holding a magnifying glass, as Jupiter would draw clouds around himself to hide his mischief, but Juno could peer through these clouds. Jupiter is holding a lightning bolt.
42
288
days left