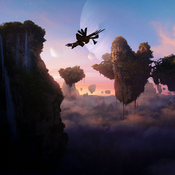 The great leonopteryx, known as Toruk in Na’vi’s language. His name can be translated as Last Shadow because the last thing you see when it attacks is his shadow above you. Toruk is the apex predator of Pandora, it is feared but respected by the different Na’vi tribes.
I’m a huge fan of Avatar and it’s been a while that I wanted to build iconic creatures and vehicles from this movie. So, I started to create this project a few months ago and I have modified it a lot of times to be more realistic and more robust. I wanted to create an articulated model so it is more playable and it can take a lot of positions like a flying one, a walked one where the “feathers” fold or an intimidating one and lots more!
Now if you want your own Toruk to lead and win every battle you do against the invaders, support my project.
I hope that you like it.
Ogel