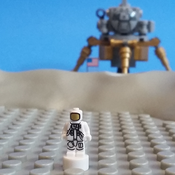 Why did I build this and why would I like it to become a set? First, I built this creation because I really like astronomy and space travel. Secondly, I saw that Lego Ideas really didn't have that many exploration vehicles, and so I thought, “Why not a moon exploration vehicle?” Furthermore, the other moon vehicle sets, on Lego Ideas, inspired me to make my creation. Why I would like my creation to become a set is because I think Lego should have more space exploration sets avaiable. It would be fun to have a moon crawler as a Lego set considering the projected U.S. mission to the moon in 2020 with the Orion space craft and the pursuit of sending men to Mars. This is why I have submitted this creation, please support.