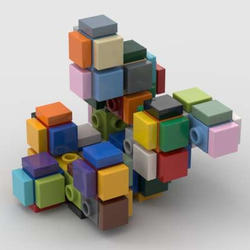 Building time
41
This is a model of a rafter battling whitewater after just going over a waterfall.
About the Model
I didn't at first intend for this to be a Lego Ideas project. In fact, it wasn't even going to be a rafting scene, but the idea came to mind as I was building it. The model is different from the work I normally do. I tried to create a near-studless design, using many round slopes to create the waterfalls. As part of the original design, I wanted to use many transparent elements for a cool water effect. The raft can easily be separated from the water as it is connected by only one stud. I built and rendered the model using Studio.
Applications
The set is meant to be a display model with a nice black border around the base. I think it would be best suited for older Lego fans, who like to build and display sets.
Features
If you like, please check out my periodic table or other creations as well!
Thank you for reading!
41