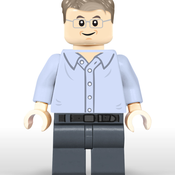 As an addition to the Skylines of the Architecture series, here is my interpretation of Stockholms' skyline. Built in the very same style as the official sets, four iconic buildings of Stockholm is added.

From the left, first out is the Kaknäs tower (Kaknästornet), a 155 m high TV tower that used to be the highest building in Sweden until Turning Torso in Malmö was completed a little more than a decade ago.

Second is The Ericson Globe Arena, or more commonly known as The Globe (Globen). A silhouette that has dominated the skyline since the arena was completed in the late 1980's.

The third landmark is the Sergel fountain at Sergel's Square (Sergels torg), the central point of Stockholm. In the middle of the fountain is a glass sculpture by Swedish artist Edvin Öhrström, named Crystal - vertical accent in glass and steel (Kristall - vertikal accent i glas och stål) or more commonly known to Stockholm as the Stick (Pinnen).

The fourth and last of the landmarks is the Stockholm City Hall (Stockholms stadshus or Stadshuset for short). Constructed between 1911 and 1923, the City Hall is considered to be the most exquisite example of  national romanticism in architecture. The City Hall is nowadays most famous as the location of the Nobel Prize festivities.

The model consists of a grand total of 482 bricks, roughly in line with the other official sets in the series.