Minion from Despicable Me 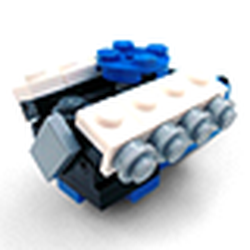 10K Club Member
gotoandbuild
2
In my opinion these were the best characters in the movie. Its a relatively small number of bricks so the price should be low, and since the contruction is fairly straight forward and simple it would be easy for kids to make.

I wasn't planning on posting this, but with Despicable Me 2 coming out next year this set should have great appeal. My plan for the set is for it to have the bricks needed to make the minion with two eyes and the shorter, fatter minion. Remember, this is the preliminary design. If it hits 10k Lego will modify it to make a better set.

As suggested by ultron32, the final set will also include a Minion Minifig, just like the UCS R2D2.