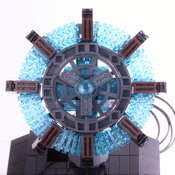 “Then let us be rid of it, once and for all. Come on, Mr. Frodo. I can’t carry it for you, but I can carry you. Come on!”
Nearly two decades have passed since Peter Jackson’s epic Lord of the Rings trilogy burst onto the fantasy scene, shattering records in the film industry. The trilogy has it all: strong likable characters, an epic soundtrack, and an even greater story of love and loyalty. But the greatest of these just might be the miracle of Middle-earth coming to life on the big screen! Once just words on a page, Middle-earth was brought to life in such a fantastic way, from the cozy cottages of the Shire all the way to the fierce fires of Mordor.
I created this set to fill a gap in the LOTR Lego world. The map of Middle-earth has been recreated entirely with Legos. The miniature scale lets LOTR fans enjoy the thrill of the entire trilogy in one unique set.
I wanted to create a set that captured all of LOTR: a set that was display-worthy, but fun to build again and again. I hope you enjoy building it as much as I did designing it! I tried to fit in as many locations as possible: as you can see in the pictures, I have labeled each location accordingly.
If you like the idea of holding a bird’s eye view of Middle-earth in your hands and reliving the magic of LOTR, please support and share! Thank you!