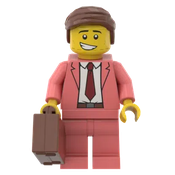 By IceStationZebra
25 comments
Join Sir Richard Branson and his friends as they fly to space aboard the VSS Unity!
Like so many boys & girls around the world, as a child I loved building spaceships out of LEGO, designing the sleekest, most swoosh-able creations out of the '80s & '90s, and taking the crew on the wildest of adventures. Countless hours were spent fine-tuning my designs, making sure they were ready to take on whatever they discover on their missions.
Founded in 2004 by Sir Richard Branson, the goal of Virgin Galactic is to provide sub-orbital travel for tourists who yearn to experience zero gravity. After many years of difficult research, development, and trials, Virgin Galactic has finally been approved to fly passengers as of June 2021, and is undergoing final test flights, with Sir Richard himself due to fly in July 2021. This will herald a new wave of tourism which in time will become affordable and accessible to the masses.
The VSS Unity is one of Virgin Galactic's fleet of spaceships and has most recently been flown to space in a May 2021 test flight. Dropped from it's mother-ship plane, the VSS Unity ignites it's rocket and heads for the moon (almost!), allowing the passengers to experience weightlessness for around six minutes upon reaching space. It's beautifully sleek retro design features a 'feather' system as part of it's sub-frame design, allowing the fins to tilt upwards and provide a safe, cushioned re-entry on the way home from space.
In this creation, I have channeled my inner-child to design what I hope is my best LEGO spaceship creation ever. A detailed cockpit is ready for the most astute rocket pilot, and a futuristic cabin comfortably seats three passengers (the real spaceship features room for two pilots & up to six passengers), easily accessible by a removable cockpit & hinged top. The 'feather' system is fully integrated, with the wings able to rotate up to around 60 degrees from their resting position. For those who love stickers on their LEGO, the spaceship feature's the VSS Unity's real livery and call sign number, along with the giant Virgin Galactic logo adorned upon the underside (using stud-reversal techniques for the many tiles). The cockpit & passenger windows make use of stickers to implement the VSS Unity's distinctive round & triangular portholes. The bright chrome pieces are easily substituted for light bluish grey (I couldn't help it - I love bling!).
Flying with Richard are his friends Kathy, Leon and Geoff. As a fan of the original Pirates I noticed the monkey was missing from the recent Barracuda Bay set - I'd like to imagine that's because it's too busy exploring space! Also included is a mini rocket (the way I used to make little rockets as a child), a travel bag for these bold adventurers to hold things, a small moon display, and a shiny moon rock.
Who would've thought that in 2021, we are on the brink of tourists finally being able to visit space. Maybe one day before too long, the children who loved building LEGO spaceships will finally ride on a real one. Until then, perhaps they can build the VSS Unity. :)
Thank you for reading and I hope you enjoy looking through this creation. Any support would be greatly appreciated.