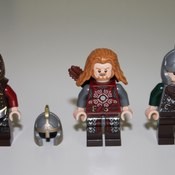 This set is built of the design of the grand hall of Rohan in the Lord of The Rings. It contains 3 people and 6 weapons. This set also contains 3 glasses/bottles and 3 food items. The set is built i four pieces that can be linked in multiple combinations to create your very own hall of Rohan!

this set contains 3 Mini-figures, King Théoden, his nephew Éomer, as well as a generic Rohan soldier.

This set is very similar to helms deeps design and does not at first glance appear that great. But I believe that this set is great for play and comes with a strong selection of mini-figures. Also it would be great to be able to get another Lord of the Rings set as we have not had one of those in a while!