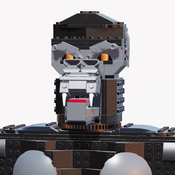 By t306
38 comments
This project is a brick-built King Kong based on his appearance from the film Kong Skull Island. The model contains several posable joints which include bending elbows, movable legs, a head that can swivel from side to side and an opening and closing mouth. In addition, there is also a platform decorated with jungle scenery for Kong to stand on.
I started this project because King Kong has yet to appear in LEGO form. I believe that this iconic character would make a great addition to the world of LEGO. This model is composed of more than 1300 LEGO elements. This monstrous King Kong would make an exciting build and eye-catching display piece for young and adult fans of LEGO alike.