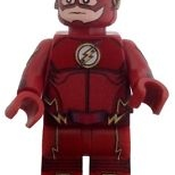 Rugrats was a '90s cartoon TV show (and series of movies), centered around the adventures of an entertaining group of babies/young children. Tommy, Chuckie, Phil and Lil allowed us to view the world from a babies eyes time and time again. They would constantly deal with the struggles of understanding our world, all while trying to avoid the misconstrued advice of Tommy's older cousin (Angelica).

In keeping with this theme, my set was made to honor the shows Opening Credits - Tommy, Chuckie, Phil, Lil, and Angelica near their playpen (surrounded by meaningful toys: Star/striped ball and Reptar).

No matter where the stories took these children, Reptar (the lime-green T-Rex) was always close. I tried to emulate this by including my version of The Reptar Mobile. This was a rather large, wagon-style/utility vehicle, that followed the babies everywhere.

As the series went on, new experiences would challenge/reward the kids (i.e. a new baby brother, and new friends). To encompass this, I've included Tommy's little brother (Dil) and Angelica's friend (Susie).