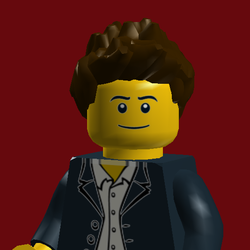 This set is from the 2002 PC game BuzzingCars, developed by Epsitec. This highly detailed model includes the Hooly Wheely withand Robby the Robot's concert stage. Robby's arms are fully poseable, the water cannon can rotate, and Robby can even ride on the back of the Hooly Wheely!

I would have used the 1x1 circle tile with the eye design for Robby's eyes, but they were not on Lego Digital Designer. Also, the 2x2 blue tile on Robby's chest needs a sticker of a quarter note and the orange designs on the side of the Hooly Wheely would be stickers.

I built this model because I loved the game and I love building with LEGOs! I built Robby and the Hooly Wheely a few years ago, but I have submitted them now because I have improved them immensely.