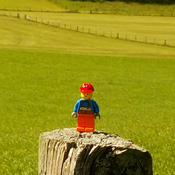 Once upon a time, there was a Lonely Wolf in the hearts of the Alps in Europe! His live was not easy, because he lost his pack of wolves, when he was a cute puppy. So he had to survive in the rough Alps alone. He learned by himself, how to hunt, how to defend himself against wild boars and bears and how to get along with the dangerous storms in the mountains.
After years, when he came of age, he became the biggest and strongest wolf in the whole Alps. But he did not know it, because he was still alone. The Lonely Wolf felt, that he could not stay alone any more, his urge meet a pack of wolves and join them was stronger than ever! He wanted to meet a she-wolf and he wanted to have puppies, as cute, as he was many years ago. He knew that there was just one way, to get in contact with other wolves, he had to howl and hope, that someone would hear him. So the Lonely Wolf was standing every night on the top of a cliff and howls to the moon. It was a beautiful but at the same time a sad song from a wolf, whose biggest dream was to meet other wolves. Weeks passed by without any answer to his howling. From night to night, the wolf lost more and more his hope.
One night, the full moon shined as bright as the sun and gave the Lonely Wolf new hope. He climbed his cliff, sat down, put his head back and howled louder, than every wolf could howl. Then, after his beautiful and sad wolfsong, he listened carefully and really, far over the mountains he heard the silent howling of a wolf.

This was the story, I thought about, while I was creating this diorama. It shows the Lonely Wolf from my own story, while howling to the full moon as loud, as he can. My diorama consists of three parts: The Lonely Wolf in position of howling, his cliff in the Alps, which he uses to howl to the full moon in the star sky.

The star sky is just a black wall with bricks modified in it to hold the stars and the moon. The Background is connected with the cliff with just two LEGO Technic pins. The cliff is another wall, I located around after building it. Brick modified fixe the decoration and the wolf on it. The wolf was a real challenge to build. Especially the head, which should have been well proportioned, was hard to build without any introduction. I used the SNOT-technic to make it as realistic as possible.

If you look attentively to the star sky, you will see the Big Dipper!