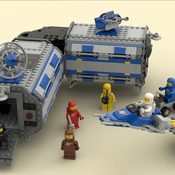 Classic Space is one of LEGO most iconic themes. And while sets such as Benny's Space squad and promotional minfigures have given minor expansions to the old theme, it wasn't until 10497 Galaxy Explorer that I felt the era of Classic Space was really reborn. The set is incredible, but to keep the price at $100, it's missing the lunar base. So that's what I've done. Though isn't an attempt at recreating the exact base design, it is meant as a follow-up/companion set to the Galaxy Explorer by adding a base and additional vehicles. So let's walk through the set:
Image 1: "Cover Image" of the set with all the parts and figures shown. One thing to note is that the set's figures are the original 5 spacemen colors, as well as a new color with the reddish brown spaceman!
Image 2: Image of the base exterior. The left pod features a radar dish and skylight on the roof. The right pod has a small defense turret in case of asteroids. Between them is a black section of tubing connecting them. All sections have removable roofs.
Image 3: One side of the left pod interior. On the left is a computer console for scanning the environment or communicating with the ship and other bases. On the right is a material analysis lab. The clear 1x2x2 panels are on hinges and can rotate down to place a crystal inside.
Image 4: The other side of the left pod interior. On the left is a set of mechanical arms currently being used to cut into a crystal. On the right is a tool rack with 2 each of flashlights, communicators, and wrenches.
Image 5: One side of the right pod interior we have, on the left a console for the emergency asteroid defense blaster. On the right side is the food preparation area, where we've got a drink dispenser (blue for cold, red for hot), a plate with a turkey leg, and a blender.
Image 6: The other side of the right pod, the crew's sleeping quarters. There are two beds, and as shown, each bed has a place for the spacemen to put their air tanks before going to sleep.
Image 7: The Lunar Rover in it's charging port. The charging port doubles as a comm tower.
Image 8: The Lunar Rover separated from it's charging port, so you can see both individual elements more clearly.
Image 9: The scout ship on a landing pad.
Image 10: The scout ship removed from the landing pad. It connects via a 2x2 jumper plate.
Image 11: One last image of everything together. The set is 1099 pieces, a little less than the galaxy explorer, though it does contain two more figures.
Thank you for reading, everyone. I think this set would be a great addition to the Classic Space revival we've been having recently. Be sure to support if you like it, and if possible, share it on social media, let's get this made!