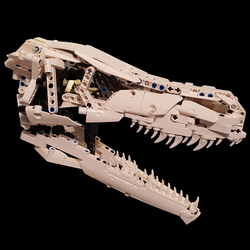 The most famous horned dinosaur Triceratops (‘Three-horn face’), a member of the chasmosaurine group. With its 3 horns, a parrot-like beak and a large frill that could reach nearly 1 metre (3 feet) across, the Triceratops skull is one of the largest and most striking of any land animal.

Triceratops the largest of the horned dinosaurs was a herbivore of the Late Cretaceous [67-65 MYA] found in what is now North America, living in forests with prairies. The short horn on it's nose, long horns over it's eyes, and solid frill were a formidable defence against predators. Growing to 30 ft (10 m) in length and weighing about 9.8 tons (10 tonnes), it was a gigantic animal and one of the last nonbird dinosaurs.

Now you can own a part of your very own Triceratops, a Skull at a scale of 1:50. Be amazed by its size and power and view this horned beast from any angle on its display stand. This would be the perfect addition to any lego collection. Approximately built from around 2000 pieces mainly technic.

The skull is approx 90cm in length and 60cm wide. On the display stand it is 60cm at its widest and 90cm at its highest.

Thanks for taking the time to look at my build and if you like it please support and share it. Thanks again ;]

If you like this build please check out my Tyrannosaurus Rex Skull [1:50] build at;