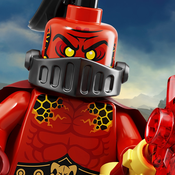 The original idea for this project was a mech for Harley Quinn, but after the initial build I felt it was better suited for the Nexo Knights universe. I tried to stay true to the Nexo Knights theme using only pieces from Nexo sets and giving it that medieval diesel look that most of Jestro's  machines have. The head is my favorite part of the build, it reminds me of a welders mask and Dr. Frankenstein's monster mixed together and the only color change I feel would be more appropriate would be to make the claws on his left hand red. Since the release of the battle suits for the knights I thought this idea would make a good counter option for Jestro and his army. The model contains around 150 pieces that's without a minifig or other potential accessories.