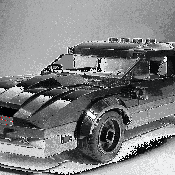 F.L.A.G. Mobile Unit is probably an inseparable element of Knight Rider universe. This one is 79 studs long, 12 studs wide and 20 studs high. It’s made for the scale of my KITT. Because this truck wasn’t shown inside very often or very precisely, some things, e.g. lengths between objects  were made up absolutely by myself. Some inaccuracies are also imposed by shapes of existing bricks and minifigure size. And it must be able to corner.  Anyway, my FLAG SEMI truck is made as accurately as I could. Now some explanations:

- Black panels (1) in semitrailer walls which break gold stripes should have stickers or patterns of slanted gold stripes (to connect the broken ones).

- Panels on back (2) also should have gold stripes

The set should (or even must) include following minifigures: Devon Miles, Bonnie Barstow and RC III.

If You’ve got any suggestions for changes, improvements - write it in comments. I’m still working on a better version with technic frame, but it’s quite hard. I’d like to make a lighter semitrailer which can be opened, but is still strong and ready to use.