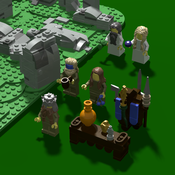 By R.Brickmaster
19 comments
What is Stonehenge?
My new creation portrays the prehistoric UNESCO world heritage site of Stonehenge.
The ancient monument is believed to be 4000 to 5000 years old.
There are many theories about the purpose of Stonehenge: A symbol of peace, a place to celebrate the solstice, a location were ancestors were honored and sacrifices were made.
My Interpretation made out of 2046 LEGO bricks and reflects the current appearance of Stonehenge.
Who are the minifigures and what are their accessories?
The culture that is responsible for Stonehenge was long gone, when the celtic tribes arrived, but - although unproven - it may be possible that celtic settlers interacted with the site and that their druids used it for rituals.
Since the celtic people are primary associated with Stonehenge, are better researched than the original builders and likely found the site in a situation resembling today’s, I decided to include five celtic minifigures:
•a druid & a druidess (advisors, healers, priests and sometimes lawyers. Older druids pick apprentices to share their knowledge.)
•a celtic warrior, a paint maker and a king (the celtic people used blue facepaint to scare their enemies)
•A table with gold, a statue and pottery is included as the treasure of the king.
•The tool holder with a sword, an axe, a spear and the decorated wind Instrument called carnyx belongs to the warrior.
•The water puddle with the bones as well as a plant and a polished stone are there for the druids to study and perform their rituals.
•A pot with a brush and a berry are also available so that the paint maker can mix her face paint.
Why did I built Stonehenge?
I managed to collect the viking from the 20th collectible minifigure series and felt in love with it‘s unique design. It didn’t quite fit in line with older viking sets and I thought to myself, that it might be a celtic warrior instead. Stonehenge jumped into my mind and I began dreaming, building and researching.
After watching the National Geographic documentation on Stonehenge, I wanted to make sure that my Stonehenge does not feel lifeless. Hearing that Stonehenge is connected to another place called Woodhenge and might symbolize the duality between life and afterlife, honoring the ancestors and life of the living and a road inbetween, fascinated me.
Another reason why I wanted to built the celtic minifigures is, although they might had another interpretation of Stonehenge, they are suspecting of having a similar philosophy: They used a symbol most commonly called the celtic yin-yang hinting at a comparable concept of related dualistic principles.
Why do I believe in my Stonehenge design as a LEGO set?
Stonehenge is definitely along with the egyptian pyramids the best known and most popular ancient building.
The huge diversity of bricks allowed me to use different techniques, allowing for a varied building experience and an unique display set.
The minifigures serve to imagine how daily life was back then and invite to play and tell stories.
I am confident that such a LEGO set can inspire countless other builders to create other historic sites and get to enjoy and discover the now vanished cultures of the past and their way of living. Although the past is over, it shaped the present and can become a source of learning from mistakes and achievements.
The real Stonehenge and LEGO bricks also have something in common: What seems to be just pieces at first glance is a complex system that generates meaning and emotion and both fit the LEGO groups philosophy of "inspire and develop the builders of tomorrow". Stonehenge inspired me to build, imagine and learn and my believe is that LEGO Stonehenge is capable of doing the same.