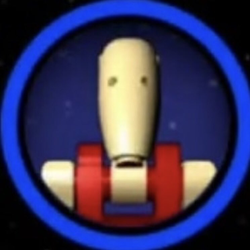 "Orbiting Earth in the spaceship, I saw how beautiful our planet is. People, let us preserve and increase this beauty, not destroy it!"

These words were spoken by Yuri Gagarin upon his return to Earth from a mission that made him the first man in space. The mission was monitored by nearly the entire planet as Gagarin made his orbit.

I bring you this replica of the Vostok-1, the famous craft that Gagarin used on his flight. It comes with a launch pad that doubles as a display stand, complete with a sheet of details about the Vostok-1, as well as a figure of Gagarin himself!

This set can double as either a display, or for play! The launch pad itself features a raising and lowering mount for the rocket, so that you can 'raise' it into launching position, with clamps that can holy the rocket in place, or be easily moved aside for removal and launch! Little included details like radio towers and monitoring cables add to the effect of the launch pad.

This set would appeal to history lovers, space enthusiasts, teachers, students, children, and modelers! If you like this model, support it maybe?

As of the final first version of this ship, it has 926 bricks total.