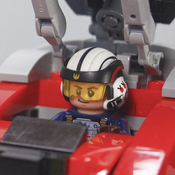 By Keith Espinoza
54 comments
I've always been a fan of giant robots. As a kid growing up, the thought of piloting a robot gave me goosebumps. It was my dream back then. Lego became my medium to make this possible. It has and always will be for a lot of imaginative "MOCERS" out there.
This mech is going to be my first and hopefully many attempts for LEGO Ideas. It's themed after the samurai warriors of Japan which I admire for their unique armor and overall appearance. The MOC itself includes a very sturdy and articulated frame which I have been developing since I was a child. It also includes a cockpit to fit a minifig. It's a mix of old and new LEGO system pieces, a bit of LEGO technic pieces and a lot of room for customization (*Includes a plain fabric for additional effect and drama).
This MOC probably has a low chance of succeeding. But for the little kid inside of me, this submission is already a dream came true.