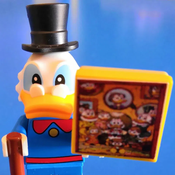 DuckTales is one of the most beloved cartoon of all times, not only among the Disney ones.
There was a building in the show so unique and iconic that no one can forget: THE MONEY BIN!
A legendary fortress that dominates the skyline of Duckburg and contains the fortune of the richest duck in the world: 3 cubic acres of cash.
Re-enact DuckTales adventures!
This is the perfect set to display your ducks from Disney Minifigures series 1 and 2. With Flintheart Glomgold and the Beagle Boys they'll now have some enemies to watch their back from.
With this model, you'll be finally able to re-enact your favorite adventures and... swim in money!
Well, your minifigures at least, because...
It's a piggy bank!
The back of the roof has an apposite slot to insert coins, that will go straigt into the giant money pool (3 floors tall)! Remove the back wall to admire it through the big transparent panels. Empty it opening the back wall: it's a giant door.
Extremely modular thank to its "drawer design"
I inserted a lot of easter eggs into this model, but what's the point if they are unnoticed? That's why every floor (roof included) can easily be removed to appreciate every single detail or play with it. Simply pull it towards you, just like a drawer.
Tons of playability.
With a secret passage, a trapdoor, shooting cannons, armored doors, a bath tub full of coins and much more, this model ensures hours and hours of fun for both kids and grown ups.
Plenty of accurate details.
The number one dime, the giant money pool, the coins bath-tub, the canopy bed made of 100 dollar bills, the trapdoor... all the most iconic details (any many more) are included in this model.
Potential to start a new theme!
Wheter is in a medieval castle, a pirate bay, an egyptian pyramid or the deep space, there is literally no place where the richest and most adventurous duck in the world wouldn't go to chase a treasure.
I would love to see him in other sets that could revamp some of the most beloved themes by Lego fans.
Good for kids!
On top of being a thematic that kids love, this set makes use of simple but efficient building techniques. You don't need to be an expert to build it, just very patient. Also, most of the bricks used are very big so that can't be swallowed accidentally.
Two big sets in one.
Once removed, the 3 floors and the vault can all be stacked on top of each other so that you can admire all the details at 360 degrees.
Front wall, side walls and roof can instead be joint to reproduce the exterior, so it's like having two giant sets in one.
Big fun in compact space!
This build has slightly less than 3000 pieces, yet it measures less than 34 cm in all three dimensions, so find a place to display shouldn't be too hard. Not bad for a set with so many details.
NOTES:
The 1x1 gold plates showed in the giant money pool pictures animation are clearly for presentation purpose only.
It would take around 4000 of them to completely fill the pool, exceeding the 3000 parts limit of Lego Ideas big time... also, it's supposed to be filled with real coins like in the picture.
The last picture is the animation of the model with the previous cubic design, so that you can keep track of the evolution of the project during time and appreciate better the effort put in the new slenderer design (also, should you prefer it, it shows a different way to build it)