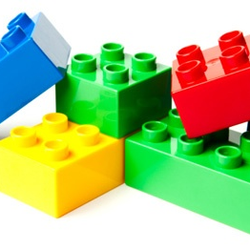 The Luxor Hotel & Casino in Las Vegas (USA) as a LEGO Architecture Model with 443 pieces. The hotel is named after the city of Luxor (ancient Thebes) in Egypt. Luxor is the second largest hotel in Las Vegas which contains a total of 4400 rooms, including 442 suites, lining the interior walls of a pyramid style tower and within twin 22-story ziggurat towers. This LEGO model shows the entire hotel complex with the pyramid, the two ziggurat towers and the pool landscape in the back of the hotel.