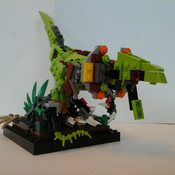 One of the largest and deadliest predators in Jurassic World, the mosasaurus can hold up in a fight against any foe, even an Indominus Rex, who can be found at the bottom of the tank! The mosasaurus ruled the seas of the early Cretaceous period, hunting turtles, sharks, and even other mosasaurs. The creatures strong fins helped it glide through the water, and used it's tail to propel itself through the water.

This LEGO model of the 5 ton 60 ft long monster is about 13 inches tall and 6 inches wide. It uses over 400 pieces, including the base and everything on it. The mosasaurus is fully articulated. It has movement in the neck, jaw, tail, and all four flippers. The model is somewhat fragile, as it is being held up by a tall clear stand, and a connection between the sand base, and a portion of the tail. The set's accessories include 3 small bone pieces, one large bone, a shark, an Indominus rex rib cage and skull, and 3 weed pieces (all of which can be rearranged).