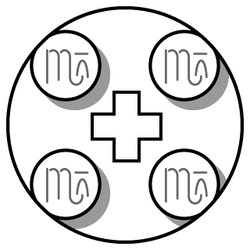 This is the nano-figure scaled model of the famous Lighthouse of Alexandria, one of the seven ancient wonders of the world, with its height of more than 100 m (340 ft) one of the tallest buildings on Earth for a long time. The structure stood for about 1500 years, although its original design is not known in perfect details which left some precious space for the imagination.
What I really wanted to show is the great size of the building. The model is 38x38x47 cm (15x15x18.5 inch), which would be a considerably big set even in minifigure scale (has roughly the same height and area as 60228 Deep Space Rocket & Launch Control which my son owns), but when compared to the tiny nano-figure its huge size is more visible. Still smaller than in reality though.
Nano-scale building is a great challange and I love it! (It is no doubt inspired by LEGO Architecture series.) The key is to find the perfect piece to make the structure similar to the original. Also, working with half-stud widths is a fun puzzle. I did not use many new special items due to my old school knowledge of LEGO (basically from the '90s), and the now limited palette of LDD which I worked with. But for the lovers of small details I included one of my older designs, the nano-scale Greek Bireme which turned out to be a perfect companion to the tower. The palm garden in between the walls (very hypothetical) is also a detail addition to counterbalance the squareness of the building.
Ancient theme is still kind of a rarity in the LEGO universe, but - for sure - many people love it, so I hope the community appreciates this fresh effort. Please let me know whether you like this model or not, I am open to any criticism. Also, feel free to contact me via my Facebook-site. And of course I hope with your support it can be an official set once in the future! :)
147
316
days left