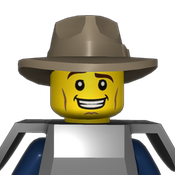 Take a journey with me as we explore the Queen's temple built into the narrow ledges of Grand Ice Mountains through LEGO bricks! The enormous structure clung to thick ice that surrounded the temple. Snow covered several of the structures, normally swept away by the brisk and chilling wind. The wind howled ferociously as the temple guards stood watch over the Queen. This was the temple of the great Evil Queen, frozen for more than 500 years in the very snow that persisted year round at such high altitudes. After decades of being unable to defeat the Queen, the cult of fire finally made the attempt. They started by trying to free the fire dragon, only to learn he was also frozen 500 years ago by the Evil Queen! The fire cult was devastated to learn their dragon would never be freed again. This was the start of a new era for the Queen, she was able to watch over her temple without the fear of the fire cult and the fire dragons. This set will take you though a variety of levels, blues, whites and various sizes and shapes. Fun for all LEGO enthusiasts of any age.