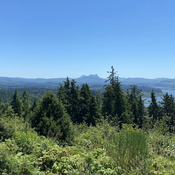 Multnomah Falls is a waterfall located in Oregon in the United States. Since it is near Portland, it is a popular attraction for both tourists and locals alike. At 620 feet tall (189 m) it is the tallest waterfall in the state.

My model depicts the iconic waterfall using LEGO bricks. Its base is 16 studs wide and 32 studs deep while its height is about 38.5 cm. I have included both of the waterfall's drops, both pools of water, and the footbridge people can cross to get a better look at the waterfall. Both sides have large trees while miniature ones stand at the top, representing the tall firs native to Oregon.

As Multnomah Falls is one of the most recognizable places in Oregon, I thought it would make a fantastic LEGO model and a popular set. A set like this would make a perfect display piece due to its size and how it looks. It would also intrigue fans from the Pacific Northwest, outdoor enthusiasts, and people who like waterfalls in general.