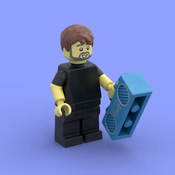 By samdemmy
47 comments
Whether it's the modulating beat of Aphex Twin or Frankie Knuckles, the backing to in your face hip hop tracks from Public Enemy or NWA, the iconic pop sound of Madonna or the Pet Shop Boys... the 808's got your back.
Rock Music has the Stratocaster.
Jazz has the Steinway.
Classical has the Stradivarius.
For everything else... it's the 808.
Those who haven't heard of the uncontested most iconic drum machine have almost certainly heard it. The 808 laid the foundations of modern music as we know it and the catalyst of genres such as Hip Hop, House and Pop music.
Created in 1980 by the Roland Corporation, this legendary drum machine uses analogue synthesisers, meaning every beat sound slightly different, unlike other machines that play pre-recorded samples.
You may have dreamed about owning one of these bad boys... well, now you can with this accurately scaled model featuring visually matched realistic sticker sets and working controls.
I built the lego 808 as a passion project; I always dreamed of owning an 808 but it's, of course, considered an antique now, so I built the next best thing! The model itself took me over a year to build.
This would make an excellent lego kit for any keen music creators, people who have a passion for music or want to have an ode to an iconic piece of history.
Some of the tricky parts where the stickers, some of which I had to add in via photoshop. Thats why on some of the angles, some stickers are missing as it's hard get them looking right. In terms of the numbers and dots on the knobs, I am intending on adding them in soon as an update.
At the moment, the main buttons are not interactive, however I am looking to do this soon in an update.
Beyond that I would love to get the lights working.
Getting it linked to a phone app and working like a real 808 however is a little out of my skillset, so if anyone wants to collaborate on this then do let me know.