Granite - the powerhouse of The Harbigners

Many years ago, in a world of war, humans decided to move completely to artificial intelligent robotics in order to carry out the dangerous in-field missions, to avoid any loss of human life.

But the war was so intense, many people, soldiers and civilians alike, were killed. Due to such a dramatic decline in population, the war naturaly came to an end, as there were not even enough to fight it. The consequences of the war, however, were not so fast to fade. Famine, disease and residual destruction had turned the planet into a lifeless, desolate wasteland, and with no food, shelter or clean water, the remaining humans were killed off.

The only things to survive were the robots. Since the war had ended, the robots had no purpose. Many rusted away and became apart of the lifeless ruins of the planet, but a select resilient few survived. And seeing as they had been built with AI, their years of wandering alone had allowed their AI systems to learn, and develop.

But each robot developed in a different way, because each robot was built for a different purpose. Some robots, who were designed to be medics, educated themselves, to better themselves in the mind. Others were built to lead, and so they continued their mission to find other beings to lead. And some were designed to destroy. These robots saw nothing but red. The more they learned, the more they wanted to destroy the things that they had learned.

This lead to the formation of three factions: The Prime Order (the robots who seeked to lead), The Freedom Fighters (the robots who seeked only to help) and the The Harbingers (the robots seeked to destroy). Both The Harbingers and The Freedom Fighters both wanted the same thing: peace on the planet. However they both had very different ways of achieving it. The Prime Order also want peace, but they were adamant that the way to achieve it was to conquer the other bots and form a dictatorship.

This lead to the start of yet another war on an already dead planet. The AI systems of the robots also continued to develop, and this lead to the robots gaining personalities and emotions. As the robots gained friends and enemies, they began to face the same dilemma that had caused the humans to create the robots in the first place: they wanted to win to the war, but neither did they want to lose their lives. This lead to political turmoil, truce-making, betrayals and civil wars.

The war is still ongoing, with no clear victor in sight...

Granite is slow in both body and mind, but he's tough. He has by far the most resilience to the planets' harsh environments, and his brute strength means that if he manages to land even just a single hit on you, that's you out of the game... permanently. 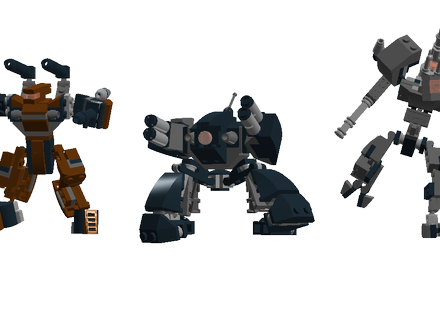